On December 9, 2017, a snowy day at Chapel Hill’s Kenan Stadium, Christina Snead made history as the first female official to officiate in an NCHSAA State Championship Football Game, wearing the stripes in the 2AA Championship that saw Hibriten knock off East Duplin 17-14. Snead attended Cape Fear High School in Fayetteville, where she admittedly leaned towards the “rougher” sports as she put it.

Though she never played high school football, she loved the game and that eventually led to her trying out for a Fayetteville Semi-pro football team. She made the team, and for six years was a quarterback and running back.

After leaving behind her semi-pro career, Snead started officiating recreational football to stay active in the sport she loved, moving on to arena football, until 2014 when she joined the ranks of the Southeastern Football Officials Association. “I love being around the game. I love to interact with the players and coaches. I just really enjoy seeing the players go out on the field, trying to accomplish their goals and win a championship. I love being around students,” she said. 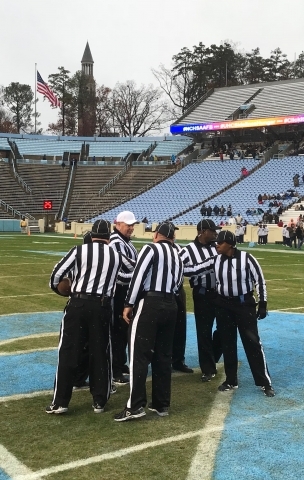 Snead is a Health & Wellness instructor at Fayetteville State University where she teaches Swimming, First Aid and CPR. She was in class the day she received the call that she would get a State Championship assignment. “When I stepped out (of class) and gave Tony Haire a call back, he said, ‘You are going to go further in the playoffs,’ and I just said ‘Cool’; but he was like ‘Christina, read between the lines, you know you’re going to the State Championship, right?”

After a second for it to sink in, Snead responded with, “You’re kidding, right?” She went on to say, “I just could not believe him, because I was finding out all of a sudden! I was shocked! I went back to my classroom and told my students. I was just so giddy, that I had to cancel my class!”

At the time, Commissioner Que Tucker said, “This milestone is attributable to many people, not the least of which is Christina Snead and her daily dedication to being the best official possible. Her accomplishment marks a wonderful day for women in all of the athletic community here in North Carolina. I’m proud of Christina and how she represents herself, the NCHSAA and her community. I hope that others, especially young women, will see her example and follow in her footsteps, giving back to their communities through officiating sports with the NCHSAA.”