Since its inception in 1991, the purpose of the NCHSAA Endowment Fund has remained the same. However, areas of focus have changed as Board members have come and gone, and the Association's and schools' needs have changed as well.  Initially, the primary focus was to provide funding for underwriting of NCHSAA special events and programs, championship events, and other programs and services for member schools if adequate funding was not available through corporate support or if gate revenue shares wained.

From 1994/95 to 1998/99 and again in 2020/21, the Board approved a total of $400,350.00 to underwrite various NCHSAA events.  The funds were utilized to offset expenses related to championship events for volleyball, men's and women's tennis, men's and women's basketball, track & field, swimming, football, wrestling, men's and women's golf, as well as a non-sports event, the Hall of Fame Banquet. Between 2000/01 and 2006/07, a total of $670,000 was distributed between all NCHSAA member schools. Reimbursements were calculated based on the number of student-athletes at each respective school.

In the past decade, continued growth of the fund led the Board of Directors to seek additional ways in which funds could be distributed to member schools for idetified needs. Between 2010/11 and 2019/20, the following efforts were initiated with Board approval:

- a percentage of Endowment Fund interest earnings was distributed between member schools based upon bracketed sports travel and shares earned by the host team versus the traveling team (interest earnings were combined with 50% of any operating budget overage for this distribution); Endowment interest alone amounted to over $3.2 Million

In the 2020-21 school year, over $5.7 Million has been distributed to member schools. $4 Million - Covid Athletic Program Subsidy and $1.7 Million - year-end distributions

- Since 2000/2001, over $13.8 million has been distributed to schools and students from NCHSAA Endowment Funds.

Please click here for more information and applications for these NCHSAA Endowed Scholarships. 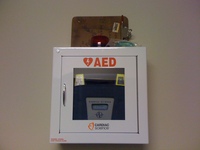 In 2004-2006, the NCHSAA undertook a project to offer AED (automated external defibrillator) units to member schools in need.  Over 100 units were placed due to the NCHSAA AED Placement Project at the cost of about $150,000 - funded by Board designated funds from the NCHSAA Endowment Fund.

The Toby Webb 'Outstanding Coach' Award was established in honor of the legendary Coach Toby Webb.

- 2007/08: Slightly over $45,000 was designated to cover football-related expenses due to loss of funding in the Winston-Salem community.

- 2015: The Board approved the distribution of a percentage of interest earnings from general association reserve funds (non-Endowment funds) via a formula including free and reduced lunch data; The formula was later modified to use the ISP (Individual Student Percentage) for each school.

-2016/17: The Board approved restricting any fine monies collected to the Endowment Fund and a portion is used to offset the cost of AIC (Accredited Interscolastic Coach) and CIC (Certified Interscholastic Coach) course work undertraken by coaches and school athletic administrators. To-date, almost $40,000 has been distributed for this purpose. (Note: Distribution is a direct function of the number of individuals who actually complete the certification coursework).

- 2019-20: An NCHSAA Education-based grant program was initiated, and over $398,000 has been awarded through the 2021-2022 school year to member schools who applied for a grant and met the established criteria.

The NCHSAA Board of Directors and staff continue to seek ways in which the Association can assist member schools' athletic programs.