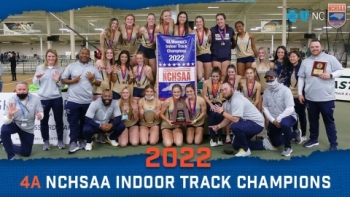 The Cuthbertson women dominated the field, outscoring second place Marvin Ridge 91-40 in the team competition on the way to their fifth straight state Indoor title. The Cavalier women only won a pair of events but were prominent on the podium in team victory. Stella Kermes was the lone individual title winner for Cuthbertson rolling to individual gold in the 1000 Meter Run with a time of 2:54.76.

The Cavalier 3200 Meter Relay set a new all-Classification State Meet Record by clipping the tape in 9:24.12, nearly 13 seconds faster than the second-place quartet from Mount Tabor. The Cavalier’s time replaces the record set in 2015 of 9:25.42 by Leesville Road’s team of Taylor Hemming, Nevada Mareno, Sydney Winchel, and Jasmine Butler.

The 4A Women’s Most Outstanding Performer was Akala Garrett from Harding University High. She won the 55 Meter Hurdles in 7.88 seconds and brought home the victory in the 500 Meter Run in 1:14.37. She also finished second in the 300 Meter Dash, clipping the line in 39.94 seconds just behind Wakefield’s Shawnti Jackson who won the event in 38.30 seconds.

Jackson won a pair of events, including her win in the 300 Meters, earning the victory in the 55 Meter Dash in 6.76 and setting a new all-Classification meet record replacing the 2007 mark of 6.87 seconds set by Southeast Raleigh’s Gabby Mayo in 2007. The other all-Classification record to fall in the 4A meet was the 1600 Meter Run which Maddie Huecker from Lake Norman knocked down by crossing in 4:53.08. Huecker led a pack of six racers who all eclipsed the old State Meet Record of 4:57.77 set by Nevada Mareno of Leesville Road in 2015. 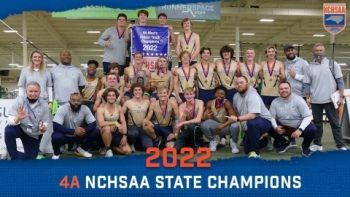 The Men’s team title was a much closer competition as Cuthbertson edged Porter Ridge 45-44 with third place Weddington nipping on their cross-county rival’s heels at 42 points. Cavalier relays helped lift the team to the men’s program’s first Indoor State Championship, earning victories in the 800 Meter Relay and the 1600 Meter Relay. The Cavalier 800 Meter Relay team posted a mark of 1:31.75 while the 1600 Meter quartet raced to a 3:28.05 mark.

Only one all-Classification State Meet Record went down in the competition. Cleveland’s Kyziah Stone exceeded the record in the High Jump when he cleared 7’ 1”. His jump bested the old record of 7’ 0” set by Broughton’s Jesse Williams in 2002.