WINSTON-SALEM, NC – The North Carolina High School Athletic Association (NCHSAA) 3A Indoor Track & Field State Championships went to Croatan, as both the men’s and women’s teams easily bested the rest of their respective 3A competition. The victory was the first State Championship for the Cougars on the women’s side and the third all-time for the Croatan men. 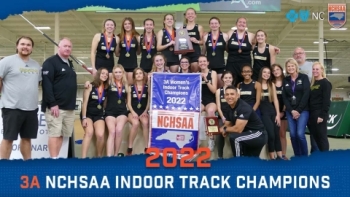 The Croatan women earned their first team State Championship behind the 30-point effort of Navaya Zales. Zales was brilliant in the 1600 Meter Run, setting a new 3A Classification State Meet Record with a time of 4:59.99. Her performance replaces the previous mark of 5:00.71 by T.C. Roberson’s Elise Wright in 2018. Zales also won the 1000 Meter Run, clipping the tape in 3:05.77. Zales was selected as the 3A Meet Most Outstanding Performer for her efforts to bring the Cougars a State Championship.

While Zales did not win the 3200 Meter Run, she finished second coming in with a time of 11:00.15 just off the pace of event winner Caroline Murrell from Northwood who set a new 3A Classification State Meet Record with her time of 10:46.69. Murrell’s time replaces the second-longest standing 3A State Meet Record of 10:48.48 set by Sarah Vance Goodman from T.C. Roberson in 1998.

Other highlights from the meet included West Mecklenburg’s Sanu Jallow who won the 55 Meter Dash in 7.17 seconds before sprinting to a 1:15.24 victory in the 500 Meter Dash. West Carteret finished second in the team event, trailing Croatan 72.5-49 at the end of the meet. Tyler Collins led the Patriot charge, winning the High Jump with a clearance of 5’ 04”, while the 4 X 400 Meter Relay team from West Carteret brought home gold in a time of 4:15.25. 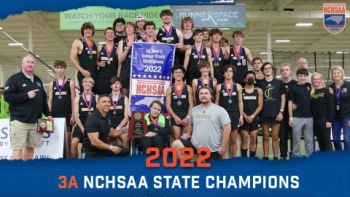 The Croatan men won their third state title, and the first since back-to-back championships in 2018 and 2019. The lone individual State Champion for the Cougars was AJ Matas who grabbed the top spot on the podium in the Shot Put with a throw of 50’ 1.75”.

The Dudley Panthers finished second behind Croatan 72.5-52 and were led by the efforts of Isaiah Moore. Moore raced to a new all-Classification State Meet Record in the 300 Meter Dash, clipping the line in 34.22 seconds. His time eclipsed the mark of 34.39 set by Panther Creek’s J Johnson in 2017 and was the lone record to fall in the 3A Men’s Meet. The Panthers also won the 4 X 200 Meter Relay and 4 X 400 Meter Relay with their quartet completing the respective distances in 1:32.86 and 3:33.94.

Cameron Snead from West Johnston was named the Most Outstanding Performer for the 3A Men’s Meet. Snead won the Long Jump and Triple Jump. His Long Jump effort spanned 21’ 0.75” while his Triple Jump cleared a span of 43’ 11.5”.