RALEIGH, NC – Cardinal Gibbons picked up their fifth State Championship in Men’s Lacrosse with a 14-5 victory over Hough. The Crusaders got five goals from Bryce Wojnovich to win the 4A Championship for the second year in a row. 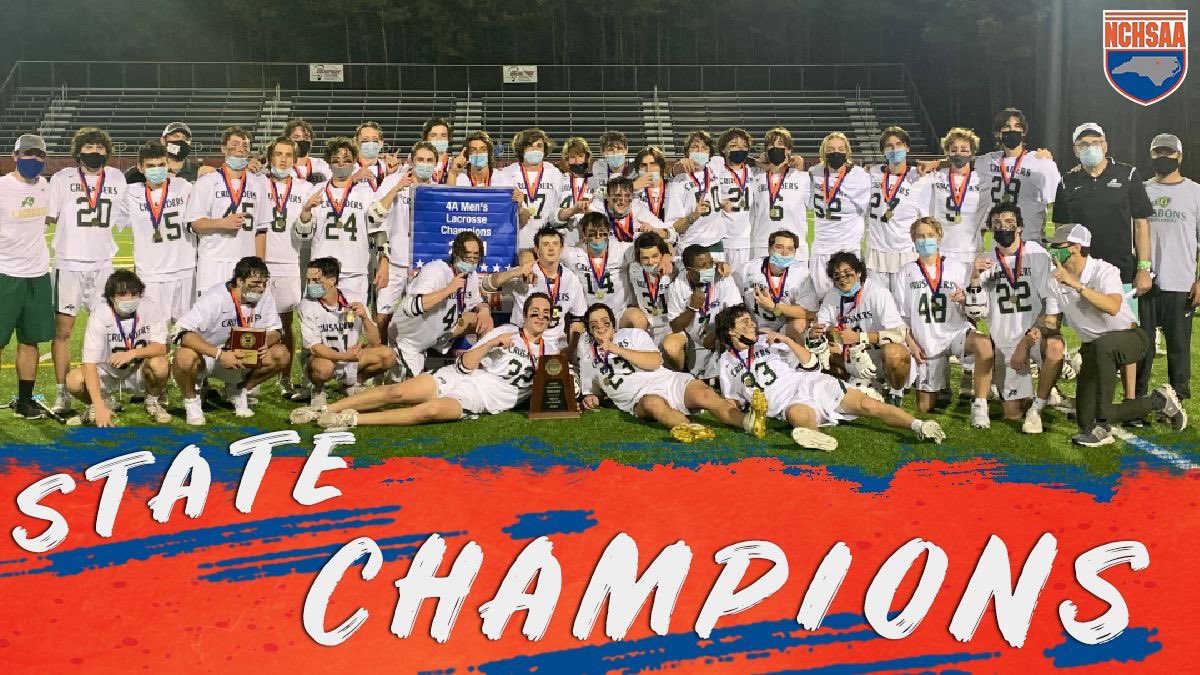 Hough grabbed the lead right off the opening faceoff as Ryan Scanlon scooted into the offensive zone and slipped the game’s first shot by the Crusader keeper to put the Huskies in front just 23 seconds into the contest. The two teams traded first-period goals, with Griffin Cooling and Caden Zadell finding the net for Gibbons, while Peyton Turner added a marker for Hough to get through the opening frame with a 2-2 tie. 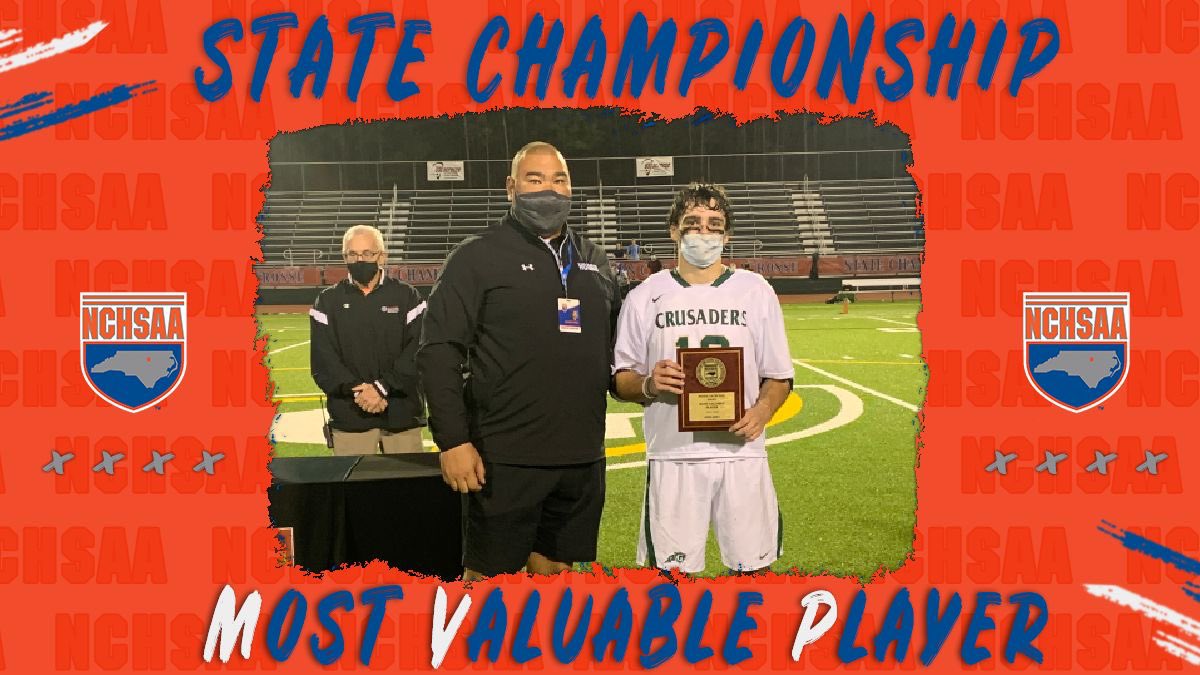 After the opening period, 4A Championship Game Most Valuable Player, Wojnovich, found the back of the net just 29 seconds into the second quarter, with Hank Kelso tallying one of his two Crusader goals about two minutes later to give Gibbons a 4-2 advantage. Hough trimmed the Crusader lead to just one at the 3:47 mark in the second, with Peyton Turner netting his second of four. Wojnovich finished the half with another pair of goals, both unassisted, to give the Crusaders a comfortable 6-3 lead at the half.

Gibbons turned up the defensive pressure for long stretches of the night, using an effective double team in the offensive zone to force many of the Huskies 26 turnovers in the game while committing just 10 of their own. Six of those turnovers were forced by Gibbons’ long stick midfielder Daniel Enoch, who also had a goal and an assist in the game.

After a Turner goal opened the second half, scoring with 8:18 to go in the third trimming the Gibbons lead to 6-4, the Crusaders answered with the next seven goals to take control. The decisive seven-goal run for Gibbons was highlighted by another two goals from Wojnovich, one in the third period and another in the fourth that capped his night in style with an over-the-shoulder shot to the twine to put Gibbons up 12-4 with 8:51 to play.

Hough wrapped up the year 13-3 on the season and the champions of Conference 16. For the first time in program history, the Huskies won the Western Regional Finals, appearing in the school’s first State Championship Game.

Cardinal Gibbons season concluded 16-0, winning Conference 5. The Crusaders won the program’s sixth Eastern Regional Championship, grabbing an NCHSAA record fifth Men’s Lacrosse State Championship. The title was the program’s second title in a row after winning the 4A Title in 2019. 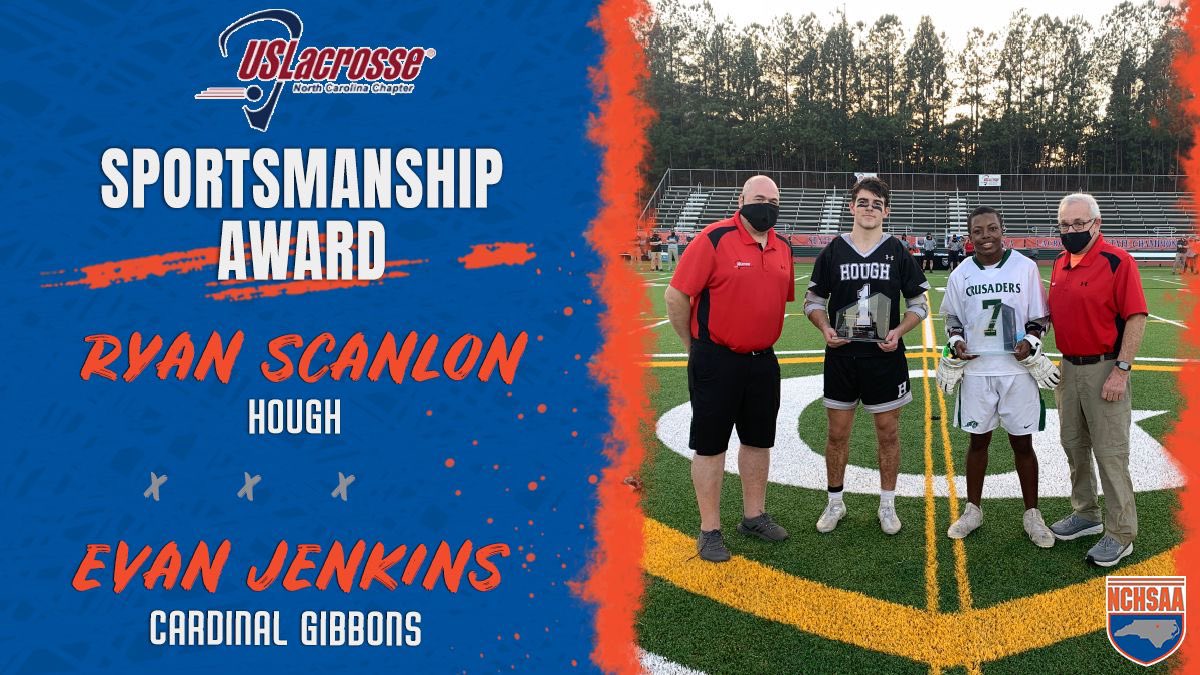 The NCHSAA is committed to highlighting and promoting outstanding sportsmanship. The Association has partnered with NC Farm Bureau to recognize one individual from each participating team in an NCHSAA State Championship who has demonstrated exemplary sportsmanship throughout the year. This year’s winners of the NC Farm Bureau Sportsmanship Awards for the 4A Men’s Lacrosse Championship are Ryan Scanlon from Hough and Evan Jenkins from Cardinal Gibbons.