CHAPEL HILL – The North Carolina High School Athletic Association (NCHSAA) is pleased to announce the eight winners of the 2020 Homer Thompson Memorial “Eight Who Make a Difference” Awards. These awards are presented in partnership with the North Carolina Farm Bureau and recognize one individual in each region that serve as excellent role models to their student-athletes through their positive and dedicated approach to coaching. The eight recipients for 2020 are Kristie Thach from Perquimans, Bevin Stokes from Pender, Jasmine Brown from Holly Springs, Jeff Nance from Gray’s Creek, Jason Tew from Cornerstone Charter, Mike Zimmerman from Harding University High, Laura Barry from Watauga, and Michael Connelly from West Henderson.

The awards are presented in honor of Homer Thompson, a member of the NCHSAA Hall of Fame Class of 1994. Thompson spent 35 years as a successful head football coach, compiling an outstanding 238-129-5 career mark. A 1951 graduate of Catawba College, Thompson coached two years at Oxford Orphanage, seven at Gray High School in Winston-Salem and then 26 years at Parkland, including 19 years at athletic director there. He also coached men's and women's basketball and track during his career. Winner of numerous Coach of the Year awards, Thompson was the North Carolina head coach in the 50th Shrine Bowl and also has coached in the East-West game. He has served on the Board of Directors of the North Carolina Coaches Association and the North Carolina High School Athletic Directors Association and was past president of the coaches' organization. For 20 years the Parkland athletic director helped to organize and run the state wrestling championships, helping it to build to the point it is today.

Winners are selected from nominees, who submit on their behalf. The following information about each recipient is in the words of the person who nominated them. 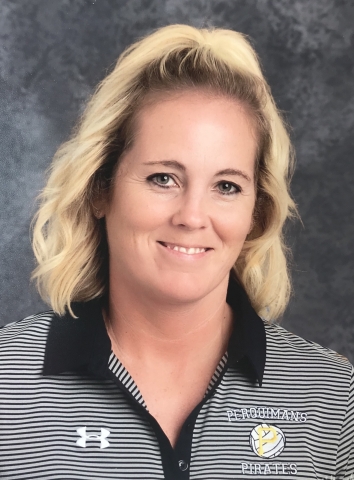 “In the four years I played for Coach Thach, I had no idea that she would single-handedly shape my life. She was tough, yet sentimental; strong yet gentle; she wanted to win yet knew the perfect dose of competitiveness to mix with sportsmanship. She knows winning isn’t everything, but that winning is defined by developing women who will one day change the world.

Sportsmanship can be defined as “fair and generous behavior or treatment of others.”  On top of treating anybody who walked into the gym fairly, Ms. Thach taught her team to do the same.  She led by example and demanded you to treat others how you would want to be treated. Coach served as a positive role model to all her teammates. Her greatest successes were the unique ways she taught us to be better people.  Before every practice, one team member had a word they wanted to focus on. Each had a different meaning, yet we were bonded by this commitment to become better for each other.

Her reach goes far beyond the court; she has taught us how to radiate sportsmanship and enact those principles into our daily life. She embodies sportsmanship and the type of affirmative positivity that is infectious.” 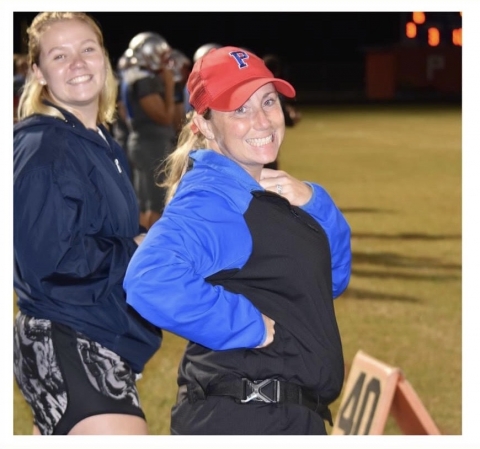 “Bevin has taught and coached at Pender High School for 15 years. She is the first responder for Football and Wrestling, coached Cross Country and Track, and been the Athletic Director for 10 years. When asked to describe their coach her student-athletes consistently describe her as encouraging, caring, and yet demanding. She looks to involve students at Pender High in athletics that otherwise would not be involved. We have an athlete in a wheelchair that immediately comes to mind. If not for the constant encouragement from Coach Stokes and her assistants, this athlete would never have found a home within our Track & Field program. This athlete now has a whole new support system.

This year she spearheaded a Meal Pack-a-thon in which over 5,000 meals will be packed by our student-athletes and Interact Club. They are also collecting non-perishable food items to be donated to our local food bank at home football games and a canned food drive at school.

It is never about what place you finish, instead it is always about how you did compared to your best. It is the same way with academics. Just like she challenges their comfort zone in competition and practice, she gets kids to take a risk and forces them to grow by taking more challenging courses that will put them ahead when they graduate from Pender High School. 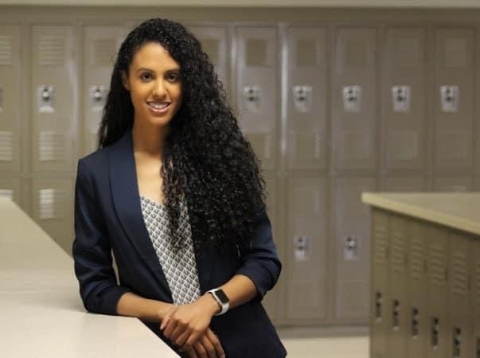 Nominated by a parent, Linette Nixon

“Coach Brown truly makes a difference in student-athletes through her enthusiastic leadership, sportsmanship, and by being a strong role model for all students. Good sportsmanship is evident in the way she fairly balances the needs of all her swimmers from the beginner to the more experienced athlete. Her swimmers know that she values their participation, and she works diligently to improve their skills.

She encourages cheering on teammates, using positive words, and showing respect for team members as well as the opposing swimmers, coaches, and parent volunteers. She has developed a buddy program for mentoring swimmers, offers dryland/yoga for the team when pool space is not available, and organized a team-building boxing class, which is a favorite for my son.

She sets the example by being at practice with an enthusiastic attuite, having an organized plan for the practice, and clearly communicating with each of them. She shows respect to her swimmers through her words and actions. Outside of the pool, Jasmine recently published her first book titled “The Money Club.” It focuses on financial literacy for teenagers. She also created a non-profit called Facts for Youth, which helps motivate and educate students on how to take charge of their financial future.

So, what makes a good coach? To me, it is the ability to bring out the best in each athlete while showing good sportsmanship as a competitor. Also, it is by setting an example to the team by leading as a role model while building a supportive, encouraging, and competitive team mentality. Coach Brown does that and more for our team. We are so fortunate to have her as the leader of the Holly Springs High School swim team and in our community.”

“Coach Jeff Nance is one of those special people that come around once in a blue moon. He is gregarious, passionate, outspoken, humble, and larger than life.  But his most important characteristic is his compassion and love for teaching and coaching. In education, we preach the importance of building relationships because we know relationships truly make the difference. Not a day goes by that Coach Nance is not seen speaking to one of his players; usually when they enter the building and ending the conversation with a handshake/hug and an “I love you.” His academic students are greeted with the same enthusiasm and warmth.  But the most special and rewarding encounters occur when one of Coach Nance’s Adaptive PE students see him standing in the school atrium. They run towards him, arms extended and a huge smile on their face…and they are met with open arms and a warm embrace, and the question, “Who loves you?” They always respond with, “You!”

Jeff works tirelessly every day to teach to all his students and players life is about more than attending classes and ballgames. It is about being good to one another, being honest and loving your fellow man.  His teams participate in “Buddy Baseball,” they assist with the “Very Special Arts Festival,” and were a leading force in the community helping rebuild after the hurricane.

Coach Nance recently passed a milestone in his coaching career by earning his 400th win. When asked what this means to him, his response was that he’d been blessed.  Yes, Coach Nance has been blessed, but the blessing he has bestowed upon others is the reason why.” 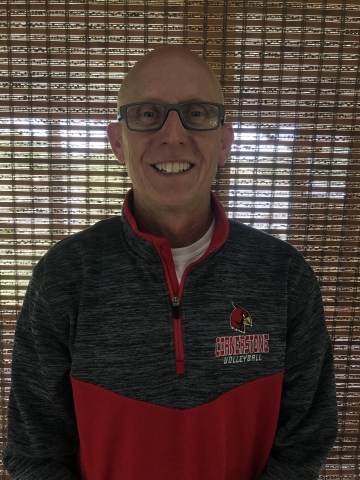 Nominated by a teacher, Jennifer Martin

“Not only is Jason Tew the Volleyball and Softball Coach at Cornerstone Charter Academy, but he is also the leader of our Campus Life program. His desire to develop athletes is defined by him placing a strong emphasis on developing character. Coach Tew repeatedly tells his teams to “never sacrifice your integrity for a point/run.” He is a leading example that winning is not the factor on which we will place our importance.  After each contest, win or lose, every player shakes the hand of the officials to show their gratitude. There are countless examples that he models each day to his student-athletes.

A positive role model is someone that should be imitated. I strive each day to follow his example as a teacher, coach and colleague. He stands alone as an individual worthy of the “Eight Who Make A Difference Award.” 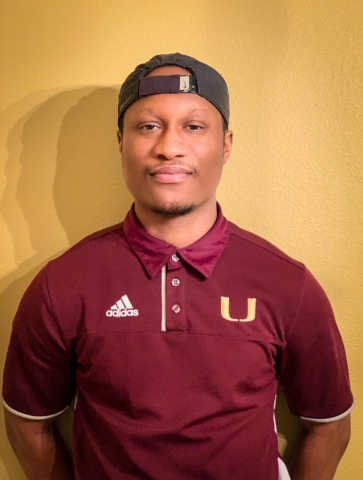 “Coach Mike is a nominee for this award because he exemplifies commitment and dedication to the Harding student body as well as a student who may need help in the community. He works around the clock to support every sport for the school, to show the student that no matter the season he/they will be on the sidelines to cheer them on.  Every sports photo taken for the school was shot by Coach Zimmerman. The belief that he has in kids shows with the relationship he has with the student-athletes. To help promote our school and get exposure, Coach Zimmerman teamed up to create a documentary, “From The Bottom,” that shows Harding’s Track & Field program from the inside out. He has created a sports show to highlight each sport program we sponsor.

Every action, every word and every moment as a Harding Ram is for the betterment of the student-athlete to motivate what the person can become, no matter the demographic from which they come. No one truly understands the adversity our students face each day, but the effort, time, and dedication Coach Zimmerman and the team put in for our student body is on another level.” 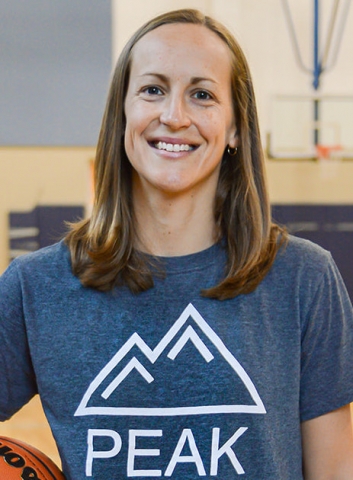 “Laura is our head varsity Basketball coach for both the women’s and men’s teams. She entered unfamiliar territory this year when we hired her to serve both leadership roles. She has done a tremendous job. Laura is a winner. Her teams not only win on the court, but they are taught how to be winners off the court as well. She is a tireless worker who puts kids first and does things the right way.

She is a leader in our community, school, and athletic department. She serves as a mentor to our younger coaches and meets with them if needed to talk about a successful way to navigate all things that come along with being a head coach. Her teams serve food at the Hospitality House in Boone. Her teams have sponsored families at Christmas by purchasing and delivering gifts to those that are less fortunate. Her players help coach at youth clinics and camps on the weekends and during the summer.

These are just a few examples of how she helps to prepare her players for life after basketball. She uses basketball as an avenue to positively influence her assistant coaches, her school, and most importantly her players.” 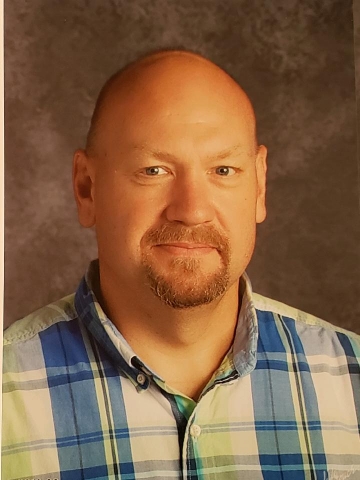 “Coach Connelly has been our Wrestling coach for 3 years. In those 3 years, he has grown our wrestling program from 25 up to 45 members. He does this with visits with each rising freshman meeting with families stressing the core values of our character, leadership, and competitive greatness. Coach Connelly is always professional, and we have been ejection-free under his leadership. This year he started a female wrestling team and finished the season with 6 wrestlers. He emphasizes sportsmanship and teamwork in all aspects of wrestling. He is a giver and respectful to all officials throughout the season.”