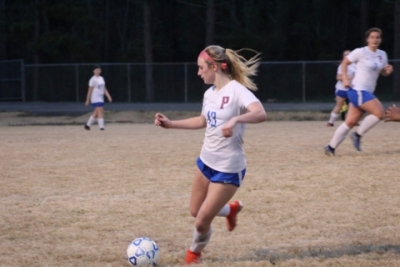 Much like other athletes her age, Mayer had goals, hopes and dreams for her senior season wearing the blue and white of Person High School in Roxboro, NC. Mayer had played varsity soccer for three years prior to the start of her senior season just over a month ago. She started her final high school season with 77 career goals but had long dreamed of reaching 100 career goals during her four years at Person.

“One hundred goals was a personal goal for me since my freshman year, but I did not realize how possible it was until my junior season,” said Mayer. Truly close indeed as during the first four games of her senior season, Mayer had netted 17 goals, bringing her career total to 94.

Then, those words. Interruption. Disruption. The season would be cut short, suspended because of a global health crisis. “I found out the spring season was being cut short about an hour before we left for the Vance game. I was extremely upset, but also not completely accepting it yet,” Mayer recalls. “Then, I realized that if I was to hit 100 goals, it would have to be that night, because I was not sure if we would even get to finish the season.”

Two more words no one likes, unexpected and uncertainty. These two can be crippling. When she realized her four-year goal may be coming down to a single game in which she would need to score six goals, Mayer began to think about all the what-ifs. She noted, “I was completely filled with anxiety and stress. It was a lot of pressure I put on myself because I have wanted to hit this goal for so long.”

Then came the game. “I had talked to my girls about the virus,” said Person Head Coach Lynn Ward. “They were concerned and confused, of course. Sports are one of those things that give these kids something. Many of our kids have split families and other challenges to deal with. Sports provides them with that safe outlet,” he added.

The game was a big win for Person. The Rockets scored 11 goals, defeating Vance County 11-2. Mayer netted eight goals in the game, eclipsing the 100-goal milestone and reaching 102 for her career. “When I got the ball for the 100th goal, I told myself that it had to be this shot,” Mayer said. “After seeing the ball hit the back of the net, it felt like I was on top of the world. I turned around and saw my teammates running towards me and as we all fell to the ground in celebration, I had tears in my eyes. Freshman Abby would have never thought that this would be something she could experience. The goal felt so far out of my reach. The moment was unreal and having the girls and Lynn to celebrate and support me was even better.”

Normally, both teams would shake hands and go their separate ways into their locker rooms and that would be the end of things. However, on this night, with all the different circumstances surrounding the game, something different happened. Again, an interruption, or a disruption of the normal routine. 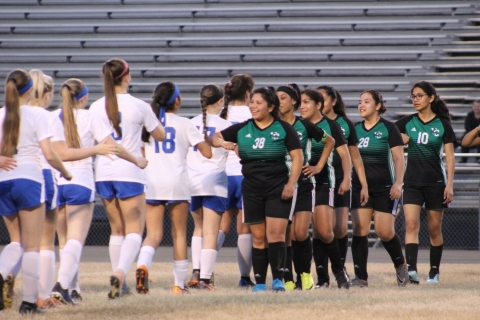 As the teams bumped elbows, the new version of shaking hands in the era of coronavirus, Coach Ward wanted to stop and talk to the Vance County coaches and players. “I told them I was sorry about the 11-2 score and the little celebration at goal 100 for Abby,” Ward said. “I just explained to them that it could be her last chance, depending on events, to reach that milestone.”

After finding out the significance of what had happened that night for their opponent, the Vance County girls responded in one of the most unique and uplifting ways possible. They ran across the field to congratulate Mayer, with many of them crying with her and hugging her to show their support. Mayer was presented with one of her old jerseys, framed for the occasion. The Vance County and Person girls joined in unison, cheering loudly as she was presented her award.

“It was one of the most awesome displays of sportsmanship I have ever seen,” said Coach Ward. “To see the two teams mingling and laughing after an 11-2 game,” pausing for a second, “they even took pictures together. It was amazing.” 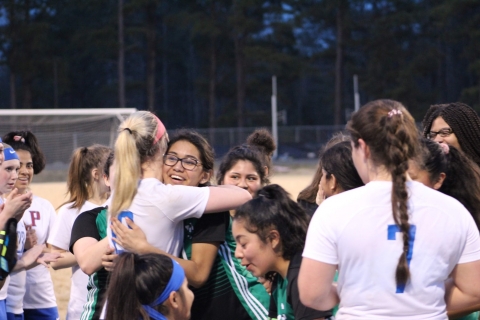 “When Vance County came over to celebrate with me, everything got even more emotional,” Mayer remembered. “It is very rare to see people you don’t know, ESPECIALLY your opponent be so happy for your success. We were all hugging, and a lot of tears were shared.” She added, “It really shows that those girls have really good hearts on and off the field. It shows that their coaches know the real importance behind the game and are instilling that so well in their program. I do not have the words to thank Vance County for the celebration and support I received from them.”

This story, among countless others across North Carolina and the nation over the last month, highlight in a major way one of the greatest lessons that high school athletics has to teach student-athletes. It is not interruption or disruption that define the moments of their lives, but rather how they respond to those moments of interruption or disruption. How someone responds to adversity leaves lasting impressions of their true character in the minds of opponents, fans and perhaps even one’s own mind.

When faced with difficulty or disappointment due to unexpected circumstances or interruptions, learning how to turn negatives into positives is a truly powerful skill. In that regard, players from both Vance County and Person High School’s women’s soccer programs displayed how truly remarkable the power of turning perceived negatives into positives can be.