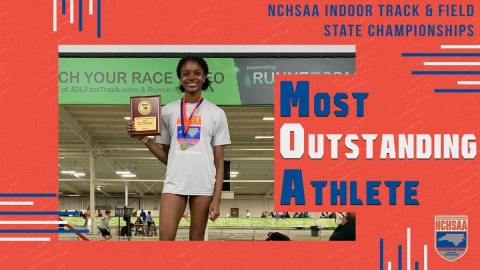 For the second year in a row, Panther Creek’s Morgan Smalls swept the three jumping events and earned the Most Outstanding Performer honors in the women’s meet. She already held the three state meet records in the event, and while not surpassing her marks set last year, she did post impressive performances in all three events. Smalls cleared 5’10.75” in the high jump, just shy of her 6’1” mark of a year ago. She leapt 19’8.5” in the long jump, just short of 19’11.25” she posted a year ago. In the triple jump, she sprang 41’7.75”, missing her performance from a year ago by just two inches. She won all three events, leading the Catamounts past West Forsyth by a comfortable 69-57.5 margin.

For the women’s meet, other notable performances included a pair of double individual event winners, Carmen Alder from Pinecrest and Shawnti Jackson from Wakefield. Alder grabbed victories in the 1600 meter and 3200 meter runs posting times of 5:00.50 and 11:09.50, respectively. Jackson sprinted to victory in the 55 meter dash, clipping the tape in 6.91 seconds, just missing the state record of 6.87 by Gabby Mayo from Southeast Raleigh in 2007. Then in the 300 meter dash, Jackson blitzed to victory in 39.01 seconds. 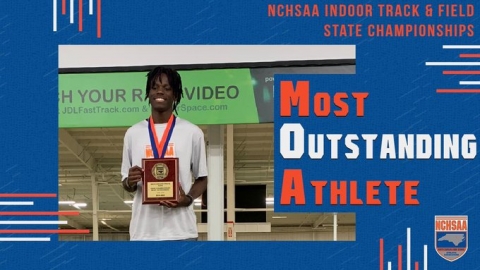 Dominique Alexander from Millbrook was the Most Outstanding Performer for the men’s meet, picking up an event win in the 300 meter dash by breaking the tape in 35.03 seconds. He also finished second in the 55 meter hurdles, posting a time of 7.62 seconds, just behind state champion Brandon Johnson from East Forsyth who nipped him in 7.56 seconds. In addition to Alexander’s heroics, the Millbrook 4 X 400 Relay team posted a victory, crossing the line in 3:31.95.

The Panther Creek men got a relay win in the 4 X 800 meter relay, finishing in a time of 8:01.43, the men’s only event win of the day on the way to a state title. The top individual finishers for the Catamount men were Jordan Payne who finished second in the triple jump with a performance of 46’6”, falling short of only Reagan’s Josh Green who marked 48’00”. Ian Harrison from Panther Creek also posted a runner up finish, his in the 3200 meter run, with a time of 9:30.30 coming in just off the pace of 9:22.96 set by John Malach from Broughton.

On the men’s side, Spencer Evans from Lake Norman established a new state meet pole vault record, clearing the bar at 16’7” and nipping the record set by Scott Houston from Northwest Guilford in 2008 when he went over 16’6”.

Other Catamount women to turn in notable performances included Susannah Truitt who won the pole vault by clearing 11’6”. Kelly Smith from Panther Creek was second in the long jump behind Smalls, spanning 18’3” with her best effort, a full 11 inches further than third place Jade Houston from Rolesville.

The NCHSAA is committed to recognizing outstanding sportsmanship in all of our championship sports. The Association has partnered with North Carolina Farm Bureau Insurance to recognize two outstanding athletes who have exemplified sportsmanship throughout the 2019-2020 season.