CHAPEL HILL – The North Carolina High School Athletic Association is pleased to announce the six-member group of the Hall of Fame Class of 2019. This year’s class is the 33rd class to join the illustrious Hall of Fame dedicated to honoring those who “have done the most for high school athletics in North Carolina” throughout their careers. 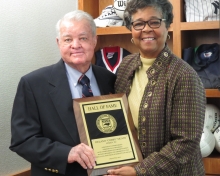 Deans coached both the Men’s and Women’s teams at Bethel High, beginning his coaching career with the Women’s team in 1967 and the Men’s in 1969. His teams won four consecutive 1A Women’s Conference Championships at Bethel before the school was consolidated into North Pitt High School. He took the Head Men’s and Women’s Basketball jobs at North Pitt, guiding the Women to the 1971-1972 Open Classification State Championship, and serving as the school’s athletic director from 1971-1988. In 1972 after leading the Women’s team to a state championship, Deans turned over the Women’s coaching duties and focused on the Men’s team and his job as Athletic Director. When he stepped away from Women’s Basketball, Deans career coaching record in Women’s Basketball was 152-16, including a 96-3 mark at Bethel and 44-0 mark at North Pitt.

In 1989, Deans left North Pitt for D.H. Conley where he served as the Head Men’s Basketball Coach and Athletic Trainer from 1989-1997. While at Conley, he led the school to a 3A Men’s State Championship. Deans posted a career record in Men’s Basketball of 444-214. 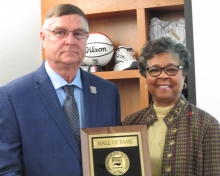 Stacy Lail, Jr. began his career as a teacher and Girls’ basketball Coach at New Hope Middle School in Rutherford County in 1973. It did not take long before he moved into the high school arena, taking a teaching and coaching position at Rutherfordton-Spindale Central (R-S Central) High School in 1977, where he stayed until 2003. During his time at R-S Central, Coach Lail coached Men’s Basketball, Men’s and Women’s Cross Country and Baseball.

His most notable achievements in coaching came with his men’s teams, which he coached from 1977-1988, compiling a record of 253-54. His teams won six Southwestern 3A Conference Championships, four District Championships, four Regional Championships and were the 3A State Basketball Champions in 1980 and 1986. His 1980 team posted a perfect 32-0 record. In 2010, R-S Central named the gymnasium after him.

Coach Lail began the cross country programs at R-S Central, serving as their coach for 12 years as well. He led the teams to eight conference championships during his tenure. Lail coached in the NC East/West All-Star Basketball game in 1986 and was selected as the Spartanburg Herald Coach of the Year in 1980. In 1988, Coach Lail stepped away from coaching after his wife was involved in an auto accident to focus on her care and recovery while caring for their daughter. He never returned to the sidelines though he remained a teacher at R-S Central until 2003 when he retired. 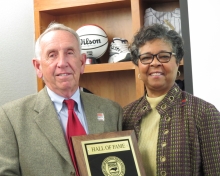 Terry Rogers began his teaching and coaching career at Oak Hill High School in 1967 where he compiled a career record of 98-39 before moving to Freedom High School in Morganton, NC in 1973. While at Freedom, Rogers served as the school’s Athletic Director as well as a coach in Football, Basketball and Golf, compiling a 603-194 record. His basketball teams won 18 Conference Championships and 13 Conference Tournament Titles. They also won State Championships, one in 1994 and the other in 1998, while securing 10 Sectional Titles. 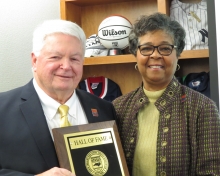 His Football Teams at Ayden-Grifton won two conference championships and were the 3A Regional Runners Up in 1981. While at Farmville Central, Coach Sauls teams won nine Conference Championships and the 1AA Eastern Regional Championship in 2003, falling to Albemarle in the finals that year. Sauls was named the NCHSAA Region 1 Coach of the year for the 2002-2003 season. His track teams at Farmville Central won eight conference Championships and he coached eight individual event State Champions. In addition to his coaching achievements, Sauls umpired high school and collegiate baseball for 22 years, earning the East Carolina Umpire’s Association Bill Suggs Memorial Award for Most Outstanding Umpire in the Association in 1988. 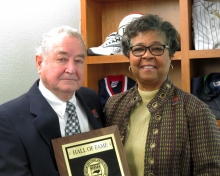 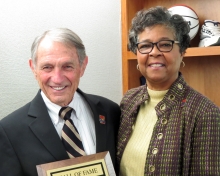 Gerald Whisenhunt began his coaching career at Goldsboro High School in 1960, where he served as the school’s Athletic Director, Football, Wrestling, Baseball, Swimming and Track & Field Coach for various stints until he left the school in 1986 to go to Eastern Wayne. While serving as a Coach and Athletic Director, Coach Whisenhunt also taught math, and was highly successful in the teaching realm as well.

Football teams under Whisenhunt posted a record of 147-72-3 while his wrestling teams were 142-34-1 including state champions in 1966 and 1974. Coach Whisenhunt served as Head Coach for North Carolina in the Shrine Bowl Game as well as the East-West All-Star Game and the North-South All-Star Game. He is a Past President of the North Carolina High School Coaches Association.