Farmville Central came out on fire from three-point range, hitting five of their nine attempts in the first half to jump out to an 11-point halftime lead. They also won the turnover battle, forcing 15 turnovers while committing just nine, scoring 22 points off of those turnovers to the Yellow Jackets 12 points off miscues.

The Jaguars’ Justin Wright led all scorers in the game with 23 points and eight rebounds, shooting three for five from beyond the arc. He also went eight for 10 from the foul line on his way to claiming the Charlie Adams Most Valuable Player Award for the 2A Men’s Championship. 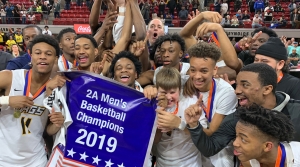 Terquanvion Smith was also sensational for Farmville Central, scoring 22 points, snagging three steals and a pair of assists to go with his two rebounds. Smith was chosen as the Farmville Central Most Outstanding Player of the game. Rande Harper was the only other Jaguar in double-figures with 12 points.

Forest Hills had a very balanced night scoring the basketball, with four players in double-figures. Zasione Tyson led the way for the Yellow Jackets with a team-high 21 points, adding eight rebounds to his effort as he was selected Forest Hills’ Most Outstanding Player of the Game. Other Yellow Jackets in double-figures included Trey Belin with 17 points and seven boards, Jamylan Blakeney with 15 points and 10 rebounds, and Jai Rorie with 12 points on the night.

Forest Hills completed the year 29-3 on the season. The Yellow Jackets were 10-0 and champions of the Rocky River 2A Conference. Forest Hills won the Western Regional Championship for the third time in school history and the second-straight year.

Farmville Central completed a perfect season, unbeaten at 32-0. The Jaguars were 10-0 as champions of the Eastern Plains 2A Conference. The Jaguars won the program’s sixth Eastern Regional Championship and their fifth NCHSAA State Championship, their first since 2016.

The NCHSAA, in partnership with the North Carolina Farm Bureau, is committed to recognizing outstanding sportsmanship. Prior to the start of the game, the Association recognizes one individual from each team with the 2019 North Carolina Farm Bureau Sportsmanship Awards. This year’s recipients were Dontavious Short from Farmville Central and Cameron Richardson from Forest Hills.