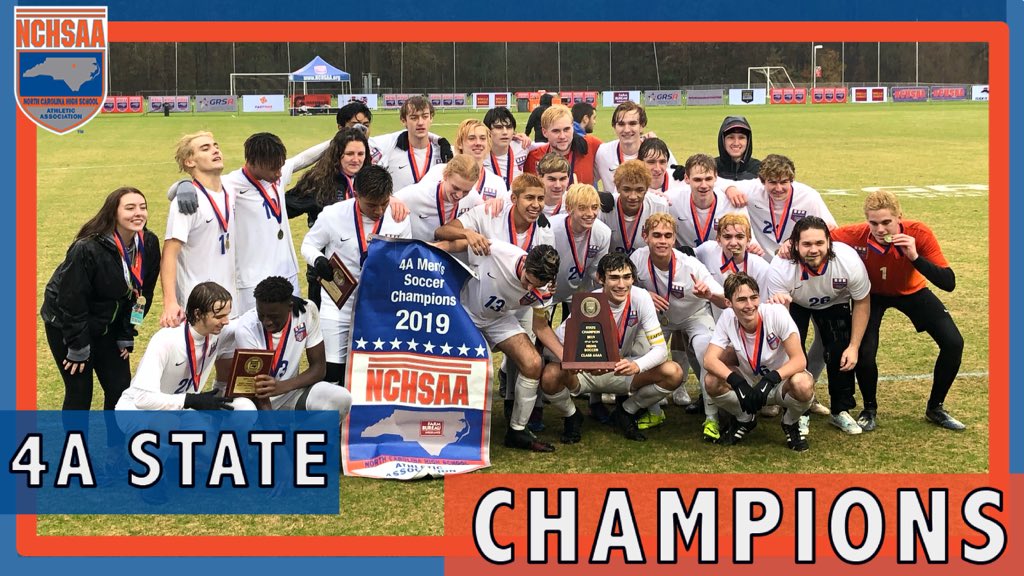 CARY, NC – In a game that was largely bereft of good scoring chances for the first 70 minutes, it was a pair of late goals that secured the second State Championship in Wake Forest program history as the Cougars slipped by R.J. Reynolds 2-0 to win the 4A State Championship.

Neither team was able to generate much in the way of attack over the first 70 minutes, as the surface played extra fast during a steady rainstorm. Much like the weather forecast on the afternoon, what started out as a trickle, turned into a full-blown downpour as Wake Forest began finding some success attacking into the box with about six minutes to play. 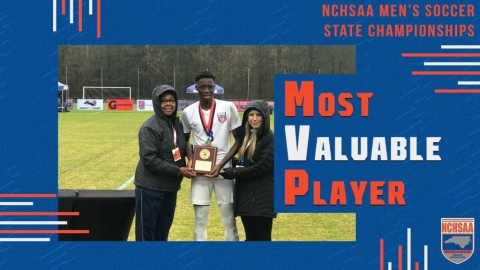 The Cougars one a corner kick on one of their forays into the Demons penalty area. While the Demons were able to clear the initial ball into the box, they were not able to completely clear their lines and the ball fell just outside the area to Austin Talmadge, a junior defender. With most of his defensive mates forward in the 75th minute, Talmadge bought time and space enough to loft a chipped ball into the box, curling onto the head of 6’ 4” senior defender Abdoulie Sanneh who banged it home to put the Cougars up 1-0. Sanneh was named the game’s Most Valuable player thanks in large part to his defensive efforts at center back and the game-winning goal.

R.J. Reynolds, suddenly trailing for the first time in the game, started pushing more men forward in the final few minutes, winning a corner kick and sending one shot just wide of the frame. Then with seconds left the game, Wake Forest cleared their lines, launching a counterattack that saw Chris Steg find a streaking Justin Palmer just outside the area. Palmer successfully chipped it by the keeper on a one-on-one opportunity to seal the Cougar victory at 2-0 with just eight seconds to play.

R.J. Reynolds wrapped up the season 19-3-1, the Demons were 10-0 in the Central Piedmont 4A where they won the conference championship. The Demons reached the State Championship for the third time in program history and the first time since 1986 when they fell to Sanderson.

Wake Forest concluded the year 21-1-2 with a 10-0 mark in Northern 4A Conference play where they won the league championship. The Cougars won the school’s second Eastern Regional Championship, returning to the State Championship for the first time since 1996. The team claimed the program’s second Men’s Soccer State Championship. 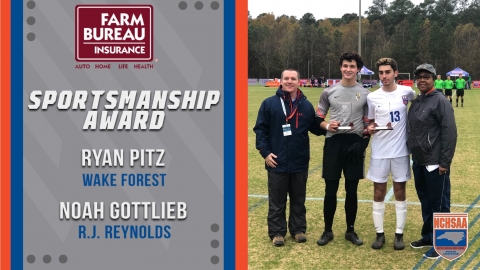 The NCHSAA is committed to recognizing good sportsmanship both on and off the field and has partnered with North Carolina Farm Bureau to recognize a deserving player from each championship team that has excelled in this area. The recipients for this year’s 4A North Carolina Farm Bureau Sportsmanship Awards were Ryan Pitz from Wake Forest and Noah Gottlieb from R.J. Reynolds.