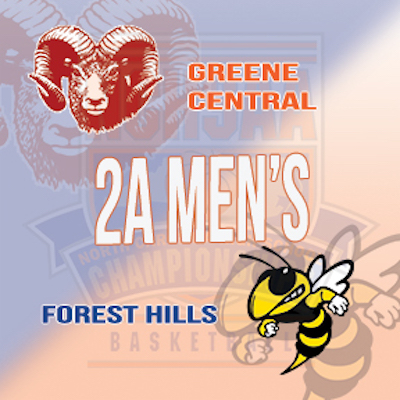 The game was a tight one throughout, as the two teams were tied on eight separate occasions and the lead changed hands six times. However, it was a hot shooting third quarter that sparked the Yellow Jackets to their largest lead, 10, as Forest Hills hit seven three-point buckets in the quarter.

Jai Rorie was the catalyst, scoring 22 points and hitting six of his 14 three-point attempts. Rorie also had a pair of assists and a steal in the game, while grabbing two rebounds. He was named the Charlie Adams 2A Men’s Basketball Championship Most Valuable Player.

Trey Belin earned Most Outstanding Performer honors with 10 points and five rebounds for Forest Hills. Jaleel McLaughlin had 16 points and two rebounds, including an old fashioned three-point play late in the fourth quarter that steadied the Yellow Jackets in the face of a Greene Central run that tied the game.

Greene Central had four players in double-figures as Torrence Clark led the way with a double-double, 12 points and 11 rebounds. He was named Greene Central’s Most Outstanding Performer. DonQuez Davis added 12 points as well, while Imajae Dodd scored 11 with Donte Johnson getting 10 points.

The Rams finished their year 26-7, regular season co-champions of the Eastern Carolina 2A conference. Greene Central won the 2A Eastern Regional Final for the first time in school history, appearing in the program’s first State Championship Game.

Forest Hills completed the year 30-2, winning the Rocky River 2A and earning a spot in the Regional Finals for the third straight year. They won the school’s first Men’s Basketball State Title.