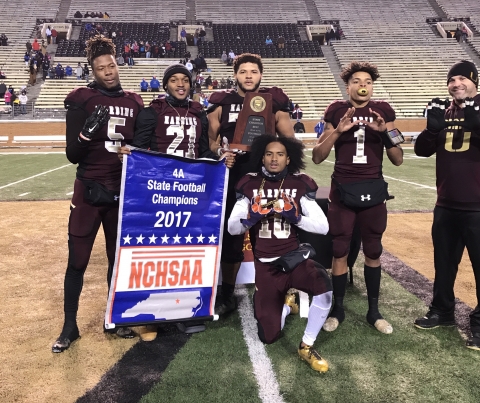 WINSTON-SALEM – Harding racked up 400 yards of total offense and held on to beat Scotland County 30-22 in the 4A State Championship game at BB&T Field. The Rams claimed the school’s third championship, and first since 1953.

Scotland opened the scoring as Warren Bell cracked the goal line from two yards out just 3 minutes into the game giving the Scots the lead 7-0. It took the Rams a little while, but they were able to respond on the first play of the second quarter as Quavaris Crouch sliced in for a 10-yard score to knot the game at seven. Crouch finished as the game’s M.V.P. with 141 yards on the ground and two touchdowns.

Bell tacked on a 4-yard touchdown run on the ensuing Scotland drive, capping off a 7-play, 85-yard drive and giving the Scots a 14-7 advantage. Bell was named Scotland County’s Most Outstanding Offensive player with 153 yards through the air and a score on 7 of 10 passing. He rolled up 111 more yards on the ground with 2 more touchdowns.

Harding ripped off the next 23 points, scoring on a Crouch 8-yard run with 5:56 to go in the first half, and adding an Alejandro Guevara 39-yard field goal with just two seconds to go in the opening half to give the Rams a 17-14 lead at intermission.

Harding opened the fourth quarter with a score as Braheam Murphy hit Reggie Burns for a 20-yard touchdown pass to push the Harding lead to 24-14 with 11:47 to play. Then with just over two minutes to go, Murphy broke off a 95-yard run to the end zone, lifting Harding to a 30-14 lead. Murphy was named Harding’s Most Outstanding Offensive player rushing for 135 yards on 10 carries and a score. He added another 53 yards and a touchdown through the air.

Scotland drove the ball down the field valiantly in the final minutes, scoring on a 25-yard pass from Bell to Bruce Wall. Syheam McQueen rushed for the two-point conversion to make it a one-score game at 30-22 with 1:28 to play. The Rams recovered the kick and were able to run out the clock for the victory.

Defensively the Rams were paced by Trayvon Corbett who had 11 tackles, three of those for loss, adding one interception which he returned 41 yards and a pass break up. Chris Williams led the Scots on the defensive side of the ball, with 9 tackles, 1.5 of those for a loss and was named Scotland’s Most Outstanding Defensive Player. 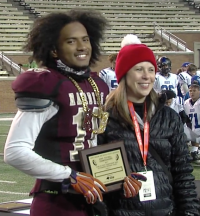 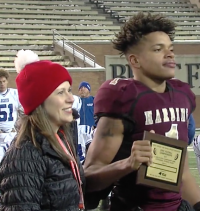 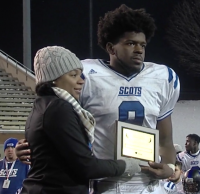 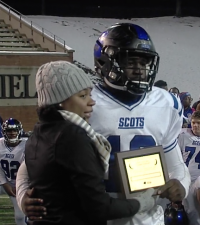 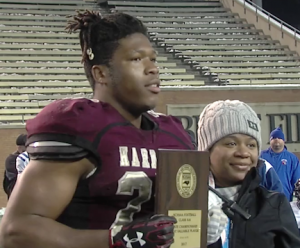