CHAPEL HILL— Shannon Sefton from Panther Creek High School and Richard Lopez-Hernandez from Franklinton High School have been named recipients of the NCHSAA Performance of the Week awards.

Each week two athletes in North Carolina High School Athletic Association competition are selected for this award from nominations received from media and school administrators. 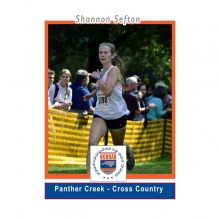 Sefton, a junior on the Catamount Women’s Cross Country squad, won the Tri-6 4A Conference Championship and was named Conference runner of the year. She posted a time of 18:21.23 to win the meet, which is the number eight time in the state to this point of the season and the third fastest time in the 4A ranks this season. 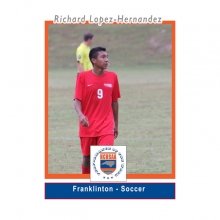 Lopez-Hernandez, a senior on the Red Rams men’s soccer team, was a star all over the field for the week. In a 2-1 victory over Hunt, he scored by bending a corner kick straight into the goal and assisted on the game-winner. He tacked on two more goals and four assists in a 9-0 win over Falls Lake Academy the next day. Finally, on the third straight game day, he helped tie the game at 1 with an amazing corner kick, and in the final seconds of the second overtime period, stepped into the goalie position from midfield to block what would have been the game-winning penalty kick for Southern Nash.

Weekly recipients will be recognized on the NCHSAA Website and social media pages. They will also be honored at a banquet for all recipients from this year in late April. The deadline for nominations is each Monday at 5 p.m through the online form that can be found here.