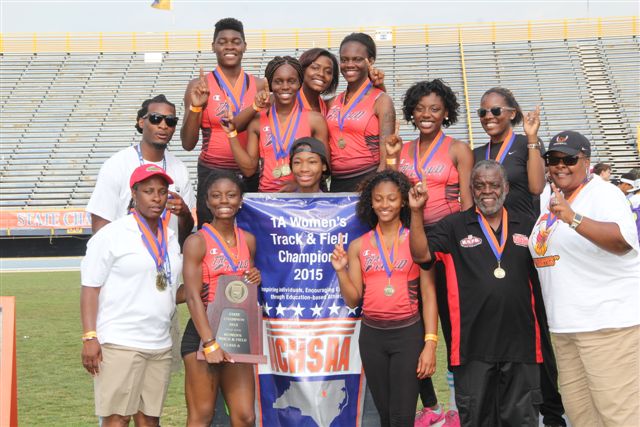 It was the second consecutive state MVP performance for Ellington, who had a grueling day in winning the 800, 1600 and 3200 meter events. In the last event of the day, she anchored the winning four by 400 relay team which set a new 1-A meet record in a time of 4:04.26.

Deonica Reid won a pair of events to lead Winston-Salem Prep to the women’s team title. Reid was a double individual winner, taking first place in both the 100 and 200, and also ran a leg on the victorious on the four by 200 relay team as Prep was strong in the relays.

Winston-Salem Prep scored 64 points, with Community School of Davidson at 56, primarily based on Ellington’s performance.  Then came Swain and Louisburg tied for third with 48 and Robbinsville in fifth with 37.

A total of 49 schools scored points in the women’s championship meet.

Senior Kylie Polsgrove of Avery County had a great meet and was also a three-time individual winner on the day, taking first place in the high jump and both hurdle events. Louisburg’s Vanisha Wilshire was a double winner, finishing first in the long jump and setting a new 1-A record in the triple jump by recording a leap of 39 feet, four inches.

In the men’s championships, North Stokes rolled to its second consecutive NCHSAA team title, paced by Laith Nickell’s victory in the pole vault and Justin Kenard taking top honors in the 800.  North Stokes recorded 60 points to 42 for second-place Rosewood, which vaulted into second by winning the four by 400 relay.

Chocowinity Southside and Research Triangle tied for third with 34, followed by Raleigh Charter (31) and Hayesville (30). There were 47 teams which scored in the men’s meet.

Trevor Carr of Camden was selected as the meet MVP, as he won the triple jump, finished second in the 200 and third in the 400.

Senior Jacob Whitaker of Andrews won both the shot put and discus in the men’s meet while Zach Boone of Mitchell was a double winner in the 1600 and 3200.

The Greensboro Convention and Visitors Bureau and the Greensboro Sports Commission serve as the host city sponsors for the event.  The 2-A championships are scheduled for Saturday.